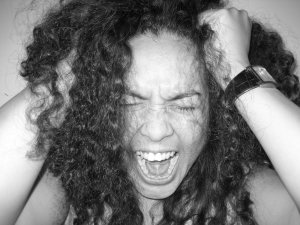 I stared in horror at the mirror. He had been here just minutes ago, and I had been oblivious, just a few feet away within the restroom stall.

Written in dark red lipstick on the restroom mirror were the words, “Congrats! You’re the next star!”

My thoughts slithered from the depths of my nauseous stomach. My sister, Amanda. Outside. Alone!

I threw myself through the restroom door, the soles of my shoes smacking against the tile floor as I ran out of the restaurant to my car parked outside.

On the ground against the base of a lamp post was Amanda’s coat, shivering in the evening’s cold breeze.

The words of the mirror’s cryptic message flashed in my mind again. I knew what he wanted.

You’re the next star!

The images of his past victims swam through my memory. The Hollywood Killer was notorious for choosing victims to drug and videotape as he performed macabre acts ending in the deaths of them or their loved ones.

To date, there’d been nine victims, and the crime scenes had been gruesome displays of horror. I should’ve known he’d target me after I’d written the editorial on his crimes. I had not portrayed him in a flattering light, and this man was 100% narcissist.

I jumped into my car and drove as fast as I could to my house, where I knew he’d be waiting. The sudden disappearance of my cell phone earlier that week was no longer a mystery. I now knew it was him who’d stolen it as part of his preparations for tonight-for my punishment.

The lights were on. I could only imagine what grotesque act he had planned for me.

He stood in the kitchen, watching me enter. I stared at him, surprised at his appearance. Had I met this man under any other circumstances, I never would have taken this well-dressed, silver-haired man as a killer. His smile was warm and welcoming, and he had an air of a man who knew his way around suburbia and kid’s soccer meets. He certainly did not seem like the type of man to be responsible for the butchering of over half a dozen innocent people.

The sudden movement of his arm pulled me back from my thoughts to my dire situation. He gestured to his left, where Amanda sat. She didn’t blink or move a single muscle. I could barely make out the slight rhythmic lifting and falling of her chest as she stole shallow breaths.

Nearby, the sink was covered in a thick layer of coagulating blood. Amanda’s left hand was bound in a thick bandage. While nothing physically restricted her movement, she remained listless and frozen in deep shock. To the rear of the kitchen, I noticed the camera set up, recording us.

“I was forced to subdue her,” he said, his eyes never wandering away from me. “Let us begin. Action!”

“Fuck you,” I responded, gritting my teeth.

He moved, quicker than I would’ve thought possible for an old man like himself. He twisted me around into a chokehold and forced a small vial of liquid into my mouth.

I spit it out in disgust as he pulled away. I rushed towards the sink, determined to rinse the drug out before the effects kicked in, but it was already too late. Invisible insects began to crawl along my spine.

Anger shot through my veins, and I turned around snarling like a beast. I reached for the knife holder and grabbed the first knife my fingers touched.

Colors swirled across my vision.

I deciphered his figure from the madness; he sat before me-taunting me. Knife in hand, I rushed him and forced the knife deep into his eye socket, feeling the blade scrape bone as it entered. I felt hot blood rush over my hands, then stepped away knowing the job was done.

Looking down, I gasped. At my feet lay Amanda’s blood-drenched body. I turned, my eyes desperately searching the kitchen for my intended target, but the killer had gone. Behind me, a slight breeze wafted in through the back door he’d left ajar from his quick exit.

Dropping to my knees, I pulled Amanda’s head into my lap and yanked the knife out of her eye. He’d done it again. Spiders ran up and down the kitchen cabinets, chasing demon shadows. Sobbing, I closed my eyes, listening to the whispers filling the room.

Gratefully, I returned to madness.

Liked what you read??

Keep up to date with all of Jade’s upcoming releases by following her on Facebook and Twitter!